小金井の挑戦! / Koganei no Chousen! / Koganei’s Challenge!
3 Days to Complete / 150 “Kizuna” Points / “He Can Do Anything” Panel Unlocked
[Prerequisite: “Kagami’s the Only One Who Can Catch That Pass?”] 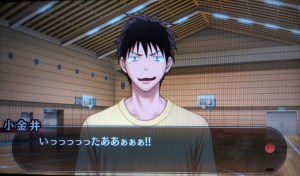 Kuroko: I don’t think this is such a good idea…

Hyuuga: What’re you two carrying on about?

Izuki: Koga’s saying he wants to learn how to catch the Ignite Pass, and he just won’t take “no” for an answer.

Kuroko: I agree. It might be best to wait a little longer…

Koganei: I know that! But I want to improve my skills, just like the rest of the team! Come on, please? Pretty please, Kuroko!

Kuroko: I won’t hold back. [sends an Ignite Pass to Koganei]

Koganei: Wha…? [tries to catch the ball] Ow ow ow owwwww!! A little slower, would you?! Not so fast!

Kuroko: But the whole point of this pass is to make the ball accelerate.

Hyuuga: We tried to warn you. That’s not a pass you can catch on some random whim.

Izuki: Hey, are you going to be alright? Your hand’s bright red… I knew this was a bad idea.

Kagami: The same thing happened to me the first time I caught that pass. …at least I didn’t drop it, though.

Koganei: Arghhhh—! Go on, laugh it up! Kuroko! One more time! [runs down the court]

Kuroko: I really don’t think this is a good idea. …I’m not kidding.

Koganei: I don’t wanna hear it! Bring it on, Kuroko!

Kuroko: Then please brace yourself.

Koganei: Come on! Uwaaaah!! [tries to catch the ball] Gaaaah—! [his hand is red and throbbing]

Hyuuga: You think we’re gonna be able to learn how to catch that pass after we do some special training?

Izuki: Even if we do manage to get it right, we’re talking about having to catch that pass several times per game.

Kagami: Are you alright, Koganei-senpai?

Koganei: Urrghhhh! It hurts so freaking much!

Kuroko: If we continue, you’re not going to be able to participate in practice. Let’s stop for today.

Koganei: Dammit—! I’m gonna learn to catch that pass, even if it kills me!

[in the dining hall]

Kagami: Whew, I’m so thirsty. I wonder if there’s anything cold to drink around here…

[Kuroko sneaks up behind Kagami but quickly disappears]

Kagami: Wha—?! Huh, I guess it was just my imagination… That bastard Kuroko…he always shows up when you least expect him, even off the court. I need to watch my back. Well, whatever. Anyway, I need to stay hydrated, or I’ll shrivel up. …(chug, chug, chug)…

Kuroko: …are you alright, Kagami-kun?

Kuroko: It must have gone down the wrong pipe. You shouldn’t flail around like that while you’re drinking.

Kagami: You bastard! You purposely waited ‘til I’d taken a huge sip before you decided to show up, didn’t you?! I was this close to drowning in the middle of the damn cafeteria!

Kuroko: No, it just so happens that I also came to get a drink.

Kagami: Seriously? Geez… Here, you can have this.

Kuroko: It’s not that I particularly enjoy scaring you, Kagami-kun. People just naturally react to me that way. The same goes for the other members of the team, as you know. However…

Kuroko: If I can successfully use my misdirection in everyday life against someone as talented as you, Kagami-kun…

Kagami: …are ya saying this is some kind of special training?

Kuroko: The thought crossed my mind, that’s all. I have no desire to actually try it, so I haven’t done it.

Kagami: So, in other words, you mean your intentions are totally and completely innocent?

Kagami: Hey, you. Answer the question.

Kuroko: Come on, let’s head over to afternoon practice. [runs off] 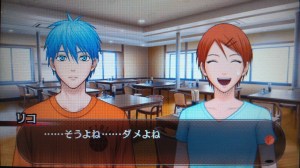 [at breakfast in the dining hall]

Riko: You can do better than that. You need to build up a lot of energy for practice.

Koganei: But I can’t eat anymore… Can’t you cut me some slack?

Riko: So you say, but this is the portion size I calculated for you after taking into account your build and the amount of physical activity you do.

Koganei: You should factor in the size of my stomach, not just my body.

Riko: You’re almost done! Just get on with it and finish your meal!

Koganei: Easy for you to say!

Koganei: Oh? Did you finish your breakfast already, Nigou?

Koganei: Oh, I know! Here, Nigou, you can have some of my salad.

Kuroko: Koganei-senpai, you can’t do that.

Koganei: Hm? Can’t do what?

Kuroko: That salad has onions in it.

Kuroko: You shouldn’t give onions to dogs or cats. Onions can poison them.

Kuroko: But pets will eat them anyway because they don’t know any better. That is why their owners need to take care to ensure that doesn’t happen.

Koganei: Whew…that was close… He says you can’t have this, Nigou.

Koganei: Don’t worry. When we get back to the room, I’ll give you a chocolate cookie.

Hyuuga: Koga, you can’t give him that, either.

Hyuuga: Foods like chocolate that are made with cocoa are basically poison to a dog or cat. Even just a little bit can be enough to kill a small dog, so you really need to be careful.

Koganei: That’s scary… There’re some really random things they can’t eat, huh? That’s too bad, Nigou. Sounds like I can’t give you a chocolate cookie, either.

Koganei: So, just for kicks, which of these side dishes can I give him?

Izuki: You can’t give him any of that! Simply put, people food has too much salt in it to be healthy for animals to eat.

Koganei: Whaaa…? Then that means I can’t give him anything!

Hyuuga: That’s why he has dog food.

Koganei: Yeah, I know… I just feel kinda bad for him, always having to eat canned food.

Tsuchida: In that case, why don’t we make some dog-safe flavored food for him? If memory serves, it should be perfectly fine to give him some lightly seasoned meat that’s been cooked through.

Koganei: Your cooking’d probably be the deadliest poison of all, Coach!

Riko: What gives? Even I can handle seasoning and cooking meat! But an all-meat diet isn’t nutritionally balanced, so…

Kuroko: You shouldn’t give supplements intended for humans to animals under any circumstances.

Kuroko: Nigou, you need to be very careful about what you eat.

Ootsubo: Midorima, do you have a minute? I have a special favor to ask of you…

Ootsubo: You see, I want you to teach your shooting technique to the other freshmen.

Midorima: ……I think that might be easier said than done.

Ootsubo: I’m not asking you to teach them how to do those super-long-distance shots of yours. But your jumpshot and mid-range shooting skills are outstanding, as well. If there’s anything you can teach them, no matter how insignificant it may seem, I think it would be very beneficial for the freshmen who have yet to play in a game. That’s right. They’re the future regulars who are eventually going to be out on the court with you as your teammates. This training camp isn’t solely for the benefit of the current regulars. I want all of our club members to take something away from it.

Midorima: ……… I understand where you’re coming from, Captain, but…I still think it would be difficult for me. I don’t think I’m suited for such a role—one that requires leading the team.

Ootsubo: I see… If that’s the way you feel, then there’s something I’d like you to hear.

Ootsubo: This happened not long after you joined the team. Coach gathered all of the upperclassmen together and said to us: “I am fully aware of the tremendous effort you have dedicated to this team during your time here. However, the next three years will revolve around Midorima. That is what it means to acquire a member of the ‘Generation of Miracles’.” …that’s what he told us.

Ootsubo: And to be honest, you are already undeniably the center of this team. You can always have someone else take on the role of organizing and unifying the team. But the one who leads the team will, without a doubt, be you, Midorima. When the time comes, you will be the one who has to bear the responsibility that comes with the title “Shuutoku, the King”. I’d like you to keep that in mind during practice from now on. What’s more, the current freshmen are the guys who are going to play with you the longest. It might not be a bad idea for them to start getting acquainted with you.

Ootsubo: Well, I know this is sudden, so I can understand if you’re taken aback. So use this as an opportunity to really think it through. 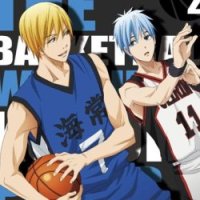 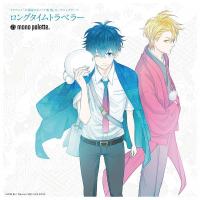 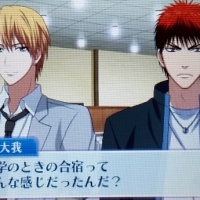